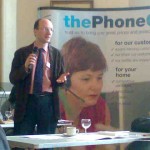 Yesterday I had the pleasure to be at the Phone Co-ops annual meeting, as those of you who follow me on identi.ca or elsewhere will already know. The proceedings included a speech from Cooperatives-UK Chief Exec Ed Mayo that included the co-op pub in Salford, spurning David Beckham’s gift and this summer’s Co-operatives Fortnight.

As ever, the bits I liked best were the lively question-and-answer sessions, both on Ed’s speech and the annual report. I took notes and reproduce them below, but I didn’t capture every question, or every answer and none of this is verbatim. Questions to Ed about UK cooperation included:

Questions about the annual report asked about: