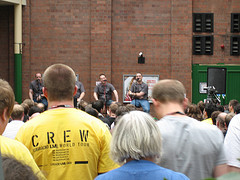 One aspect I didn’t mention in the LugRadio Live Event Review was how old-fashioned it seemed in some ways.

I guess I’ve got used to seeing conferences experimenting with various web2.0 toys like live-blogging, feedback walls and so on, or the excellent live video streaming of DebConfs, but it was a bit of a surprise to find myself the only person in the audience who connected to the IRC channel from the event.

One possible reason for that was that the wireless network was a bit difficult, or at least that was what I was told. I felt quite smug with my 3G smartphone IRC client (which I’ll blog about later) until Rufus Pollock mentioned the 800+ patents involved in 3G. Damn – I guess I hate freedom.

In one way, I guess it’s appropriate if the network wasn’t up to the task. Broken networks were a regular feature of early ALUG meetings, as the end of this email hints.

Web2.0 was there a little bit. There was a facebook page (which I accidentally spammed while travelling to the event), flickr:lugradiolive and a twitter link of #lugradiolive – but how does that work? There’s no user called lugradiolive and you can’t have usernames containing # Update: twitter:#lugradiolive (thanks to Dave Briggs for the explanation in a comment).

Anyway, seeing as there will be another LUG Radio Live, maybe we can arrange something more interactive but free-software-friendly for 2009?

More reviews I’ve read: davee: Lugradio-in’ makes me feel good…, Peter Cannon: The party’s over for LugRadio Live and No’: Lugradio Undead – but why aren’t more people writing about this event? There seemed to be enough there. Or are they out there but I’m just not seeing them?