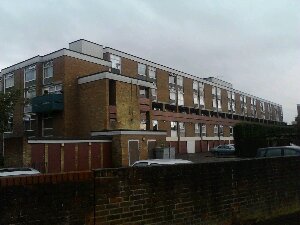 Here’s a summary of what happened at this conference. Opening address. Keynote from Nick Hurd MP, @minforcivsoc. “Lot less money around.” Called canals and rivers trust the biggest social enterprise. Blames lack of large social enterprises on culture, leadership and access to capital. First Big Society Capital investments announced tomorrow. Questions (and responses) about what had changed in commissioning (determination?), something about accountability in health I think but I didn’t hear (more public scrutiny), other models besides worker-led (gov is agnostic, but that’s just the type of mutuals so far), and capital renewal (gov is challenging the banks with Big Society Bank).

This is going to get a bit long, so click through to our site to read what the other the speakers had to say and what that block of flats in the picture has to do with it…

Still here? Good! Harriet Hounsell from John Lewis Partnership was next. What’s the Right level of profit? Structure of the partnership. The registry seems like the member services function and a bit more. Partner suggestions make a real difference. Beliefs have been tested. Recession hit us.

Questions to both on redundancies (debate openly, try to redeploy, ultimately division of responsibilities: managers manage staff levels, not members), and being rejected as too small to help other social enterprises (ask why? Try local level instead of head office?), plus praise for John Lewis.

Then there was coffee, workshops, lunch, workshops and coffee. I don’t think I should report all of that, so a quick comment on the venue at Anglia Ruskin Uni Cambridge: is the Lord Ashcroft it’s named after the same one who said it was legal to attack Iraq? Anyway… Based on the workshops, I don’t think our co-op will do SROI accounting any time soon (needs too much people time) and I’m little the wiser on leadership. Some people are intrigued by collective management and cooperative working, though.

The closing keynote was Wayne Hemingway, formerly of Red or Dead and now of Hemingway Design. He gave a quick history of himself and of those two enterprises and a bit of an entertaining ramble around. He seemed very much from the business end and how to use business to benefit society, but I’ve not really looked at his companies before. I probably should do, as they’ve a regeneration project in Lynn (pictured: before Wayne).

Then it was the closing address, the thanks (yes, thanks to the workers and sponsors) and then time to head for the exit. It’s a shame that some people who made good points during the keynotes (coop party!) left quickly instead of staying to chat.

This entry was posted in Community, Cooperatives, Membership, ThePhoneCoop. Bookmark the permalink.
Logging In...