There are three basic systems:

The first is slick and easy to use, but fiddly to set up correctly and if you want to do something that its makers don’t want you to, it’s rather difficult. If it breaks, then fixing it is also fiddly, if not impossible and requiring complete reinitialisation.

The second system is an older approach, tried and tested, but fell out of fashion with the rise of the first and very rarely comes preinstalled on new machines. Many recent installations can be switched to and from the first system at the flick of a switch if wanted. It needs a bit more thought to operate but not much and it’s still pretty obvious and intuitive. You can do all sorts of customisations and it’s usually safe to mix and match parts. It’s debatable whether it is more efficient than the first or not.

The third system is a similar approach to the other two, but simplified in some ways and all the ugly parts are hidden away inside neat packaging. These days you can maintain and customise it yourself without much more difficulty than the other systems, but the basic hardware still attracts a price premium. In theory, it’s less efficient than the other types, but in practice it’s easier to maintain so doesn’t lose much efficiency. Some support companies for the other types won’t touch it while others will only work with it.

So that’s the three types of bicycle gears: indexed, friction and hub. What did you think it was? 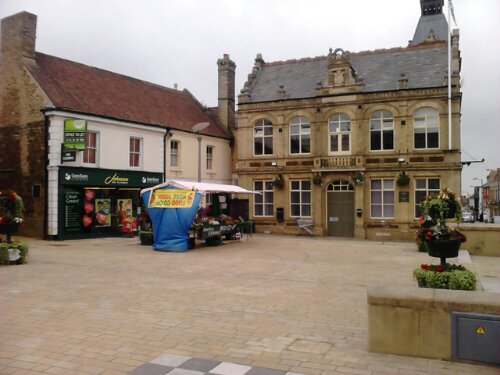 While  cooperatives fortnight is mostly a celebration of how well cooperatives are doing in the UK, this year is tinged with sadness for me because it sees Downham Food Coop stop trading.

This Friday and Saturday will be their last market stall, 9til 1 on the Town Square, aka Clock or Pump square.

As you can see, the downturn has hit the market hard and I guess being the last stall left outside the market square (see picture: it used to have neighbouring stalls!) was just too much. The coop cites shortage of volunteers and trading downturn as reasons for closure.

But if you’re near Downham today or tomorrow morning, please take advantage of this last chance to buy some great products in West Norfolk!

After years of resisting it, I’ve added the least evil Twitter/Facebook comments plugin I could find to this blog as a test and updated the comments policy a little.

Please kick the tyres and try commenting to see if it works, phase.

Posted in Wordpress and Blogs | 6 Comments

The Kelly Lessons in About 1555 Characters

So the Kelly report “of the independent review into the events leading to the Co-operative Bank’s capital shortfall” was published yesterday. During the day, I was putting odd bits from it out in 140 characters with the hashtags #coops #kellylessons. Here they are in one more permanent place. How many of these lessons has your organisation – whether a co-op or not – learned?

Are there other lessons that you would add?

Request for West Norfolk to Complete the PCC Consultation

Please excuse the intrusion to your usual software and co-op news items but vine seems broken and as part of my community and democratic interests, I’d like to share this short clip quoting Norfolk’s Deputy Police Commissioner Jenny McKibben about why Commissioner Stephen Bett believes it’s important to get views from the west of the county about next year’s police budget:

Personally, with a King’s Lynn + West Norfolk Bike Users Group hat on, I’d like it if people supported a 2% (£4/year average) tax increase to reduce the police’s funding cut (the grant from gov.uk is being cut by 4%) so that we’re less likely to have future cuts to traffic policing. The consultation details and response form are on the PCC website.

There have been some dark days for UK coops recently – the crystal Methodist and all that – and I have not been able to talk about it much because of the amount of work that I want to do before the end of the year.

Happily good colleagues have been writing about it and here’s another good article from Kate Whittle that links to Ed Mayo and Ian Snaith who are the other two that I’d suggest.  http://www.cooperantics.coop/2013/12/09/co-ops-governance/

I should be back in a few days to summarise the event I attended last week.

The 2012 Update to the Worker Co-op Code

We like guidelines. In our work, things like the Debian Free Software Guidelines, pep8 and Koha Coding Guidelines are quite useful. I follow guidelines for how I work, too. In addition to the financial reports required by government, our co-op produces an annual social report which we share with our members and other key stakeholders. Since 2007, the backbone of it is The Worker Co‑operative Code of Governance published by our national federation.

In 2012, the Worker Co-op Council updated the code. I don’t remember why an update was felt necessary, but as a side-effect of producing of our 2013 social report, I’ve made a list of the changes:

Are these good changes? Much of it seems like tinkering and maybe shifting emphasis – the reorderings add little and make it harder to spot the changes – while the lost points on long-term planning and sharing good practice are surprising. I would have preferred to see the items that seem mainly to promote the code itself and its publisher Co-operatives UK deleted instead. The additions and clarifications about surplus are good, though, and there’s nothing new that I think should stop us adopting it.

What do you think? Should all business behave this way?

The BBC coverage of the UCI Women Road Race World Championship wasn’t starting until 3pm, BBC Radio 5 Live had football and Sports Extra was playing an advert loop (really BBC?), Eurosport wasn’t covering the race at all, RAI Sport 2 had coverage which was fine while I was watching the TV, but my Italian isn’t good enough to follow the commentary and I wanted to get some other stuff done.

So the obvious thing is to have the computer watch for changes to the great http://live.cyclingnews.com/ ticker and read them out, right? Well, it was to me. Here’s the script I used:

Any questions, comments or improvements? I could have done more, like not saying “Race Update” even when there was no update, but I wanted to start listening as soon as possible!

So I have upgraded my main workstation at last, but there are a few things I wanted to figure out. Some of these I found an answer to, but others I haven’t and some answers open more questions:

Where did debian-menu.menu go and why doesn’t lxlauncher have the Debian menu by default anyway? Answer: It seems this is a combination of debian bug 333848 and bug 722563 which I reported yesterday in that lxlauncher doesn’t use the debian menus. Workaround for now: install menu-xdg and hack the lxlauncher menu file.

Why don’t my xterm shells load .profile any more? Did I bodge that before without making a note?

How do I stop kernel or initrd or whatever it is configuring the network with the dhcp settings at boot time instead of the better wicd ones that are available once the system is up?

Continuing with networking, how did network-manager (which doesn’t cope with my network configuration) get installed again? Answer: debian bug 645656 explains that debian is simply following a silly decision taken upstream and refers to attempts to make network-manager optional as “the Crusade”. Workaround: remove gnome and install its dependencies like gnome-core directly instead. Drawback: any new dependencies of gnome will have to be installed manually.

Why is the audio capture volume at 10% by default and what’s the best way to change that? I suspect this might be 682731 but that bug is untouched in over a year. I’m tempted to remove pulseaudio, but “gnome-core Depends pulseaudio” so this is yet more hardware-breaking caused by gnome dependency changes and the only way out of this one would be to remove gnome-core and install its dependencies. Or maybe I should just give up and finally remove gnome because its packages have jumped the shark. I installed gnome to make the system easier to use and it’s broken it in at least two ways now.

One question that makes me hesitate is: why is gdm3 faster to start than lightdm?

And the announcement, about the same time as the predicted birth of a royal baby, third in line to the throne, seems like a cynical attempt to bury bad news taken straight from the Blair Government. That would almost be enough reason to oppose it: they don’t want the media to look at this too closely for some reason.

So what’s this actually about? It looks like a way to force through widespread acceptance of the ability to censor most UK internet users by shouting “won’t somebody think of the children?” If you doubt it, take a look at the list of filtered topics:

So if they get away with this censorship, you won’t be able to use Twitter or contact the Samaritans until you deactivate it. Except I suspect you will because they’re pretty big and the Cameron Government won’t want to pick a fight with them: it’ll be the next Twitter and the next Samaritans, currently much smaller and unable to defend themselves, who get shut out of UK homes.

So what can we do, besides explaining this and writing to our MPs? Are we better off joining parties who oppose this censorship, like the Pirate Party, or joining existing parties and trying to overturn their stupid support for it?