What was in my Nutsack? (from Lug Radio Live) 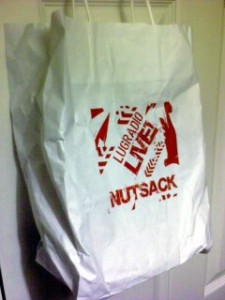 The conference pack for LugRadioLive was called a “nutsack” for some reason (anyone know why?). It seems like a pretty good pack, as far as these things go.

First of all, it’s a durable paper bag, so much greener than plastic. It contained:

All in all, smarter than your average conference pack… or am I just thinking that because it looks a bit like a picnic?