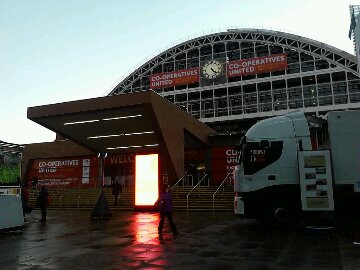 I’m on my way back from Cooperatives United. I haven’t quite posted as much as I planned (just a few microblogs/tweets) because the event was so much bigger and busier than I expected!

So I’m writing this on my (6 hour) journey home. We’ve attended Congress before and it was nothing like that. I was expecting something maybe 50% larger than last time and this seemed more like 300%. I wonder if Cooperatives UK have some numbers… Maybe it reflects the growing strength of the cooperative economy that they reported in the summer just gone.

Anyway, I was pleasantly surprised on the journey from Norfolk. I made a brief informal travellers’ co-op with an actor from Micawber Theatre company (tickets on sale now for shows in Ipswich and London) to overcome the challenge of East Midlands Trains. Unprompted by me, he blamed the shocking service on the big train businesses being unaccountable to passengers.

Maybe that’s it. Cooperatives are accountable and people are ready for more responsible post-capitalist businesses. That’s why coops are doing well now and Cooperatives United was such a lively event.

I’ll write more tomorrow. Now if you’ll excuse me, we’ve got to get off and change carriages because East Midlands Trains couldn’t be bothered to tell us the train divides at Nottingham until long after we boarded!

This entry was posted in Cooperatives and tagged cooperatives, events, success. Bookmark the permalink.
Logging In...